Overcoming Defensiveness in Our Relationships

Overcoming Defensiveness in Our Relationships 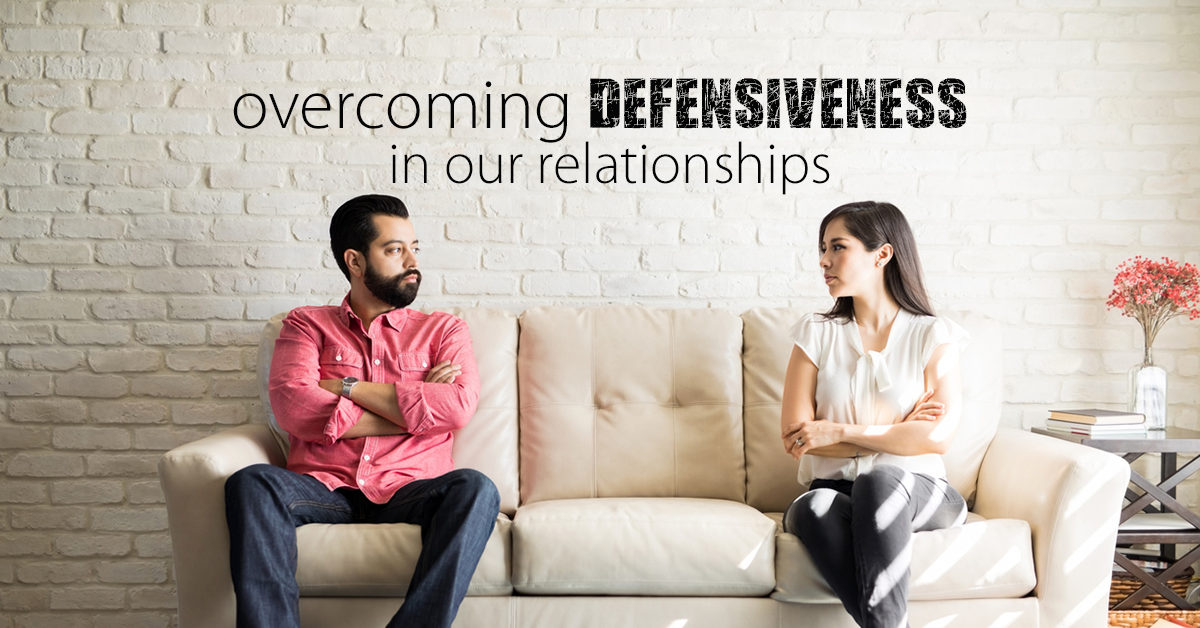 “I thought you said you were going to have dinner made by the time I got home tonight.”

“I didn’t have time because I got caught up at work. You are capable of making your own food, you know. I work just as much as you do.”

“I am capable of making my own food. I just thought you would actually follow through with what you told me, but I see that you are too lazy for that.”

“You know what? Forget it! I’ll get my own food since my spouse can’t even follow through with this tiny little request.”

You have probably witnessed and/or participated in an argument like this at some point in your life. Verbal shots are fired, feelings get hurt, nothing gets resolved, the pain from the fight lingers. How do relationships get to this point? What is the catalyst behind unhealthy communication? How do couples go from getting along so well to barely being able to speak to each other without yelling or leaving?

There is a major factor that contributes to communication dynamics like in the story above: DEFENSIVENESS. Defensiveness is something that is ingrained in us as human beings; it is literally part of how we are wired in order to defend ourselves against attacks or threats. When our personal characteristics, achievements, or values are attacked (or are perceived to be attacked) by another person, there is a part of our brain that takes over and begins to influence our responses. This part of the brain is called the amygdala, and it is responsible for our “fight, flight, or surrender” response. The amygdala would take over if a speeding car came rushing toward you, if a bully were about to punch you in the face, and, yes, even when you feel that your spouse has just implied that you are lazy. If the comment made was a threat to your identity and the way you perceive yourself, your defensive armor goes on and you prepare for verbal battle.

Once our defensive armor goes on, it is very challenging (and even frightening at times) to take it off. This is a stage couples often get stuck in. Both partners have put on their defensive armor, built a protective wall around themselves, and equipped themselves with weapons to fight back if a threat or attack should occur. So how do we take the armor off? How do we tear down the wall? How do we put our weapons away?

The underlying causes of defensiveness

It is important to explore the reasoning behind your/your spouse’s defensiveness. In most cases, individuals become defensive as a way of maintaining a connection with the other person. We are social creatures, after all, and we sometimes perceive a negative connection as better than no connection at all.  Defensiveness usually stems from wanting 3 questions answered:

1. Will you be there when I need you?

2. Do you value and care about me?

3. Are you invested and engaged in our relationship?

Changing the dynamic of defensiveness

Now that we have a basis for how defensiveness manifests and grows, you are probably wondering HOW to change this dynamic. Well, it starts with you. Yes, with you. No matter who “started” the arguments or fueled the fire, changing the dynamic of defensiveness starts as an inside job for both individuals. When a verbal shot is fired at you, what is your first response? Most people want to defend their actions. Therefore, individuals usually give a reasoning, excuse, or explanation as to why they took that action.

What is the second thing you want to do after being attacked? Usually, people want to fight back. This is typically the stage where an attack is fired on the other person.

The third thing that most individuals do after these two steps is attempt to end the conflict. However, if the first two steps are negative in nature, the third step usually involves one last yelling match, a door slamming, or someone walking away.

Many of the interactions we have during arguments are gut reactions—not thoughtful responses. To change the defensive dynamic, you must PAUSE. Notice what you want to do during an argument (defend, retaliate, or end the interaction) and DO NOT ACT ON YOUR URGES IMMEDIATELY. Reframe the defensiveness from your partner as a reach for connection, not an attack on you. At this point (no matter how valid it may feel to you), it is very likely that your spouse is not interested in the reasoning or explanation as to why you did what you did. They are likely reaching for you and the relationship between you. As relevant as it might feel to you, try not to focus on the logistics related to the situation. Instead, notice the way the situation has caused them to feel and also notice the armor they are beginning to put on due to feeling threatened. In this moment, it is up to you to respond to your spouse with love and concern, not judgment or ridicule. Lay your weapons down and show your spouse that you are not interested in fighting, but instead in finding a resolution.

Take off your armor & lay down your weapons

Just as becoming defensive can feel contagious and spread like a virus, so can the act of taking off your armor and laying down your weapons. Once your spouse notices that you are willing to be vulnerable, honest, and open-minded, they, too, will have an easier time leaving their weaponry behind. Just as the armor, protective wall, and weapons did not all appear in one day during one argument, they will not all disappear that quickly, either. There are battle wounds that need nurturing and healing. There is fear of tearing the wall down and being fully exposed. BUT just as you added bricks to your defensive wall and weapons to your collection, you can slowly but surely rid yourself (and your relationship) of them as well. This is not an easy task. This takes work and commitment from both parties. This requires both individuals to surrender to each other, agree to come together, and commit to working as a unit, not enemies. Pray for God’s guidance and blessing on your relationship.

So the next time you feel defensiveness creep in during an interaction, pause, reframe the defensiveness, explore and identify what you really hope to get out the of situation, and proceed with caring and love—leaving your armor behind.

If you are struggling with defensiveness in your relationships, the professionals at Christian Family Solutions can help. Call 800.438.1772 or click here to request an appointment with one of our Christian counselors who specializes in working with couples who are struggling. Our professionals also supply marriage screenings, and we have certified PREPARE/ENRICH facilitators on staff who can work with pre-married couples to provide premarital assessments and counseling.